At 11:40 p.m. on the night of April 14, 1912, Fourth Officer Joseph Boxhall was walking to the bridge. Suddenly he heard three bells from the crow’s nest, signaling the sighting of an iceberg ahead. Shortly thereafter, the voice of First Officer William Murdoch could be heard, frantically calling out orders to go “hard over” on the ship’s wheel. The noise of the engine room telegraphs ordering the reversal of the engines coursed through the frigid night air. 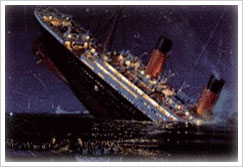 Boxhall reached the bridge, he saw Murdoch closing watertight doors just as a long, grinding jar shook the ship. Moments later the captain was at his side asking what had happened. Upon hearing the limited information available, Boxhall was told to go down and inspect the forward part of the ship. Boxhall went down and initially saw no damage, but as he continued his tour a steerage passenger handed him a large piece of ice that had fallen to the deck. The vessel had apparently struck a mammoth iceberg.

The RMS Titanic was indeed encumbered by primitive obstacle detection technology. In the early 20th century, advanced warning to potentially catastrophic collisions with automated monitoring equipment was not available. Today, nearly a century after the Titanic disaster, we find new technology has permeated the ranks of not just maritime vessels, but practically every segment of society. Safety and productivity in virtually every industry have soared to unprecedented levels. Yet many manufacturing centers still cling to old-hat protocols for recognizing and communicating problems to the decision makers. Consequently, shop floor versions of the Titanic, where misfortunate events arise from lack of timely and accurate information, continue to happen everyday.

Most order processing systems readily facilitate a mechanism for relaying customer requirements to production (such as EDI or order entry feeding MPS). Planners, in turn, have many tools at their disposal to calculate long-term material needs and capacity requirements. However, most production centers, particularly those running in discrete manufacturing environments, still rely on relatively antiquated processes to communicate immediate-term information between production planner/schedulers and associated production departments. Take, for instance, the typical daily scenario for production planning in a make-to-order manufacturing business using PRMS. With a varying degree of frequency, one or more planners endeavor to produce a short-term work order schedule, sequencing jobs such that customer requirements and internal needs are balanced to the best degree possible.

These schedules are hand-delivered to machine areas and relevant secondary departments (i.e., plate mounting, mixing areas, tool prep, etc) such that the queue of work orders can be processed through the facility as smoothly as possible. Production information, in turn, is typically reported on hand-written worksheets that are later keyed into PRMS by a clerk or material handler. The timeliness of production data on the system is therefore limited to the speed at which the paperwork can make it from the production area to the top of the stack with the party or parties responsible for keying it.

In this scenario, the arrival of an “iceberg” (in the form of an unexpected manufacturing problem or major change in a customer order) requires a series of notifications to multiple parties in order to maneuver around it. In extreme cases, planning must embark on a paper chase to ascertain where the relevant machines are on the schedule. This is followed by a rework of the appropriate machine schedules and a redistribution of the revised schedule to the appropriate areas. The time and labor involved in orchestrating such near-term schedule changes often lead businesses to “rule out” such actions, simply because of the trouble involved in quickly obtaining and disseminating the appropriate production and scheduling information. Such rigid policies can lead to generation of incorrect or excess inventory or, worse, a decrease in customer satisfaction due to the inability of the business to respond to last-minute changes in dates or quantities.

Such was the case with Rexam Flexibles in Mundelein, Illinois. Rexam is a leading manufacturer of sterilizable medical packaging and flexible films. To maintain its dominance in an increasingly competitive market, Rexam needed a means to react as quickly as possible to swings in customer requirements, as well as to keep a better handle on its internal manufacturing operations. Rexam decided it needed to find a shop floor system that would automate the flow of information between scheduling and production. The system needed to leverage the existing PRMS data from Rexam’s elaborate product routers and structures and needed to be flexible enough to work at other Rexam facilities with differing machine types and manufacturing operations.

To meet these and other requirements, Rexam chose CNX Corporation’s multi-modular ATOMIC System (Automated Total Order Management and Inventory Control). The system bolts into PRMS at strategic points to streamline the flow of work order scheduling and production data to and from the shop floor, as well as handling inventory transactions and internal documentation needs. The shop floor (SF) component of ATOMIC includes a discrete production scheduler that allows Rexam’s schedulers to sequence work orders onto specific machines. The system uses run rate standards in the PRMS soft routers to predict the precise date and time each job on the schedule will finish, based on the order in which the work orders are sequenced by the scheduler.

ATOMIC assists with the sequencing of jobs by displaying relevant information about due dates, tools and raw material requirements in columnar format alongside each work order. Machine schedules are viewed, in turn, in a strictly on-line fashion at thin-client terminals throughout the facility by relevant machine and “prep-station” areas. Work orders are automatically dropped off the schedules as they are completed, and changes to the schedule sequence (i.e., when necessitated by production issues) are automatically reflected in the on-line schedule as well. In addition to viewing schedules, machine operators use ATOMIC to log their production, scrap and hours information against the scheduled orders. This data is automatically fed into PRMS by ATOMIC, providing real-time visibility to production levels when doing a work order inquiry.

As was expected, the real-time on-line communication forum of ATOMIC easily facilitated 11th-hour changes to production schedules once the system was installed. Rexam schedulers now have the ability to radically switch the sequence of work orders and be confident that the appropriate machine operators, plate mounters, resin mixers and material handlers will all see the adjustment and react appropriately. What was not completely foreseen in the ATOMIC project at Rexam was the benefit to be derived from providing real-time shop floor data to customer service. The automatic forecasting or work order completion dates has equipped customer service with pertinent data for answering queries on product availability that once would have required a phone call to production. Also, with access to real time production information, a customer service rep can ascertain the production quantity on a specific work order currently being run and make an immediate decision on air-freighting a portion of the produced order to a customer with a sudden urgent need for material.

Users at Rexam say they are now well equipped to respond to the manufacturing icebergs that lie ahead. In fact, the success of the ATOMIC/PRMS pairing had led the division to embark on a project to roll out the system to all of its North American facilities. “Through ATOMIC we now have real-time information on material availability, machine status, shop floor schedules and shipping activity at all our plants,” explains Tom Hicks, Director of Information Technology at Rexam. “With a centralized customer service operation, this on-line dissemination of production and scheduling information plays a vital role in keeping abreast of our production operations and, ultimately, in keeping our customers happy.”